The market price of the Company's main products, battery-grade lithium carbonate and lithium hydroxide, has been going down all the way since 2018. In the third quarter of this year, their average price was approximately RMB66,000 and RMB75,000 per ton, a significant decrease of 33-44% compared with the average price of RMB97,000 and RMB135,000 in the same period last year. Dragged by this, the gross margin of the Company's products has dropped from a record high of 73.7% in the first quarter of 2018. The gross margin of the Company in the first three quarters of this year was 61%, 61% and 53%, respectively, down by 12.6 ppts, 10.3 ppts and 11.5 ppts yoy.

The Company invested USD4.07 billion in the acquisition of SQM's equity, which generated USD3.5 billion in debt. Long-term borrowings rose from RMB1.88 billion in the same period last year to RMB28.2 billion. The net liability ratio reached 266%. The financial expenses for the first three quarters were as high as RMB510 million, RMB500 million and RMB640 million. The financial expenses for the single quarter were higher than the RMB470 million for the whole year of 2018. The main reason for the Company's result setback is the surge in financial expenses incurred by asset acquisition.

Stock Placement Was Approved, which may Reduce Financial Pressure

The Company's stock placement has been approved by the China Securities Regulatory Commission. The shares will be placed to all shareholders in proportion of 3 shares for every 10 shares. The Company plans to raise no more than RMB7 billion, which is intended to be used to repay the annexation loan for the purchase of SQM equity. In addition, the Company plans to use multiple financing modes including short-term and medium-term bills, USD bonds and convertible bonds to buffer the pressure from repayment of principal and interest of the annexation loan and reduce financial expenses. If the fundraising is successful, the Company's financial pressure will be effectively buffered.

Benefited from the recovery of the supply and demand structure, Lithium prices are expected to bottom out

Currently, the price of lithium carbonate is below RMB60,000 per ton, which is lower than the cost line of many companies. The industry is on the eve of high-cost capacity clearing. On the demand side, the power battery will usher in the peak season in the short term. In the medium and long term, the new European emission standards and the electric vehicle subsidy policy will support the demand for raw material lithium. In general, the future decline of lithium prices is limited, and the upward elasticity will gradually emerge.

As a leading enterprise with high-quality resources, Tianqi Lithium is expected to continue to benefit from the volume and price recovery brought by the acceleration of global electrification by virtue of the technological and scale advantages. The Company's Phase I of lithium hydroxide project of 24,000 tons in Kwinana is expected to enter the continuous production and capacity improvement by the end of the year; the Phase II expansion of Talison has been commissioned. The operation was initiated in an all-round way.

Tianqi Lithium not only holds shares of companies with the world's largest scale and best lithium ore resources in production, but also has the world's largest processing capacity on extracting lithium from ores, which make Tianqi Lithium the best investment object in upstream sectors of domestic new energy vehicle industry chains. We expected diluted EPS/BVPS of the Company to RMB 0.08/0.64 and 9.73/10.67 of 2019/2020. And we accordingly gave the target price to 32, respectively 3.3/3.0x P/B for 2019/2020. &#34Accumulate" rating. (Closing price as at 7 November) 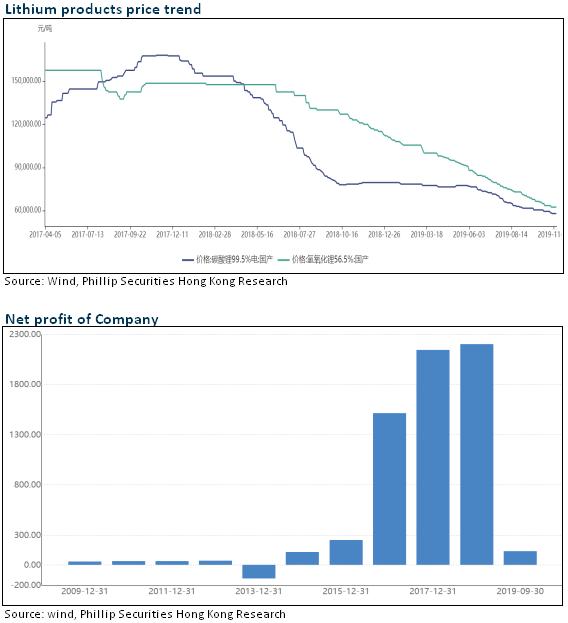 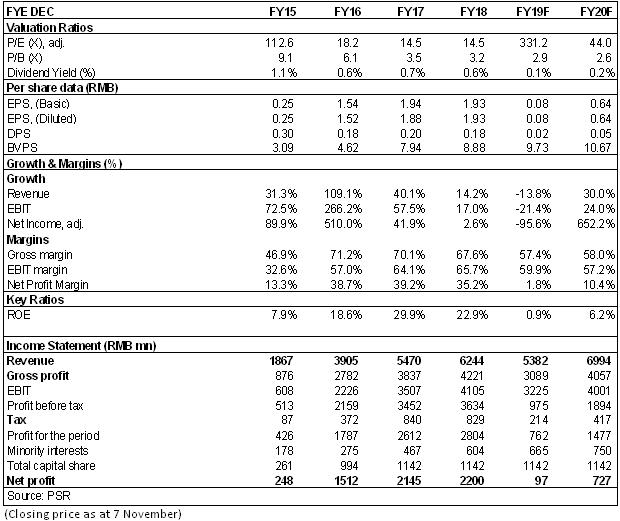