Travelsky Technology is the largest provider of the aviation information systems in China, which developed systems, such as flight control, air ticket distribution, check-in, boarding and load planning, accounting, settlement and clearing system, and aviation logistic. Based on DCF valuation, we derived a TP of HK$23.74, implied a P/E of 24.5x and 22x in 2019/20F. We maintain a “Buy” rating with a potential upside of 42.8%. (Closing price at 20 May 2019)

As the China - United States trade war resumed, the number of tourists and freight transport volume in China may reduce due to the pessimistic outlook on economy and depreciation on RMB. The China - United States trade war was reignited, after the US urged to raise the tax rate from 10% to 25% for goods from China worth USD 200 bn on 6 May and officially came into effect on 10 May. China also retaliated by imposing a tax rise on goods from US worth USD 60bn. If the intensity of conflict between US and China remains or goes up, it will definitely drive down their economic growth, or even the global economic growth. Besides, the depreciation on RMB could somehow alleviate the effect of tax rise from US side, which could maintain the competitiveness of the Chinese export. The RMB has depreciated by 2.7% in since May, reaching the previous bottom in 2017.

As the pessimistic outlook on economy and depreciation on RMB, the willingness to travel for Chinese may reduce. First, traveling is attributed to the discretionary spending, implying that it is vulnerable to the economic cycle. If the economy is heading into a recession, the number of travelling may reduce. Second, the depreciation on RMB lowers the purchasing power of Chinese travelers in foreign countries, which may eventually reduce their willingness to travel.

If the number of tourists drops, it would reduce the bookings through the Group's systems, thereby lowering the revenue of Group. The recession may also reduce the freight transport volume, which will affect the revenue from Accounting, Settlement and Cleaning Services.

However, we believe the number of traveling will remain its uptrend in the long term despite the shocks in the short term , thanks to the increase in GDP per capita. Once the monopoly due to the protection from the Civil Aviation Administration remains, the Group will be the only company that benefits from this uptrend in number of travelling. 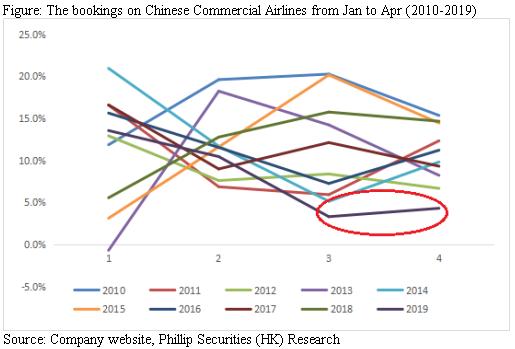 The Group released on May 15 that Spring Airlines has adopted their computer reservation system (CRS) - eTerm, implying that the travel agents will be able to purchase the air ticket of Spring Airlines via the Group's CRS.

Previously, Spring Airlines mainly sold their ticket through their own website. However, as its size became larger and the increase in international flights, direct sales will not be able to cope with the volume. As a result, Spring Airlines decided to adopt the Group's CRS.

Although Spring Airlines did not adopt the Group's Inventory Control System (ICS), the system we believe creates the greatest competitive advantage, the cooperation still could enhance the competitiveness of the Group's Global Distribution System (GDS).

We lower our revenue growth forecast in 2019/20F by 1.1%/0.46%, to 9.2%/10.6%, reflecting the pessimistic outlook on Chinese economy and depreciation on RMB, but we should see the growth resume to normal in the long term.

We adopted the DCF model for valuation, where we assume the discount rate to be 9.76%, and terminal growth to be 2.5%, with FCFF forecast to 2028F. We derived a TP of HK$23.75, implied a P/E of 24.5x and 22x in 2019/20F, 6.8% lower than our previous TP, due to the pessimistic outlook on Chinese economy and depreciation on RMB. We believe the investment ground in the long term still remains, but may suffer in the short term due to the intensified trade war. In view of the plunge in stock price, we maintain a “Buy” rating with a potential upside of 42.8%. (HKD/CNY=0.887) 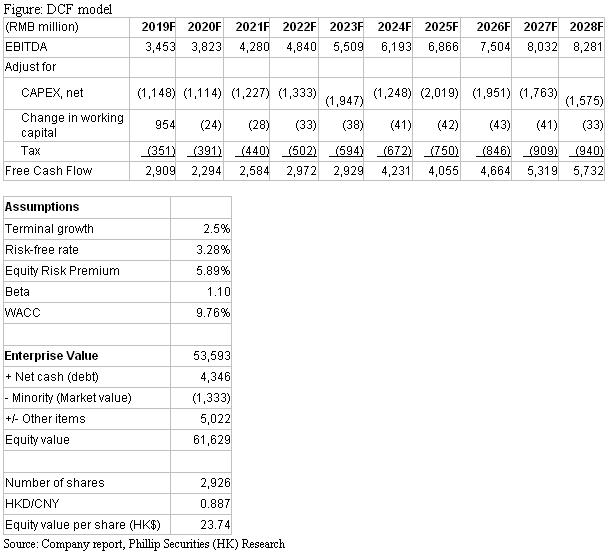 3. Airlines develop their own systems 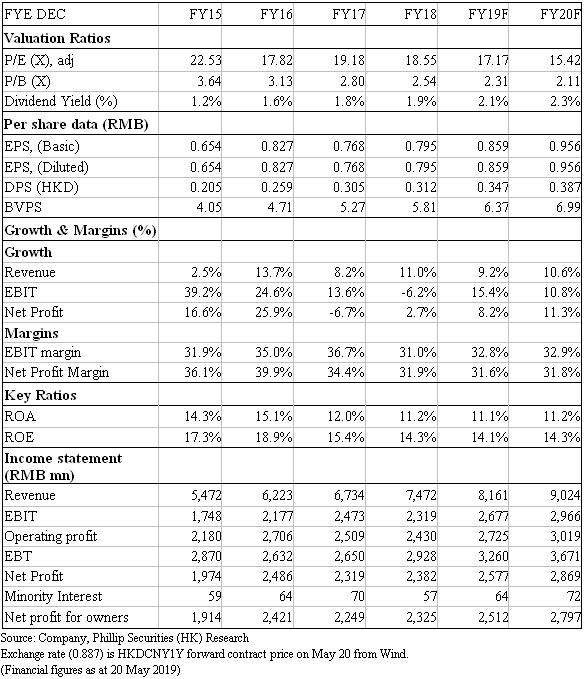