The articles are produced in Chinese only.

SIA (600009.CH) - The Overall Listing Plan Price Is Determined and the Results Are Approaching an Inflection Point

Under the influence of the pandemic, the passenger throughput of airports in China reached 907 million in 2021, an increase of 5.9% over 2020, and a recovery of 67.1% in 2019, which was a 32.9% decline compared to 2019. On a closer look at markets, due to the Spring Festival travel policy and the repeated sporadic outbreaks in China, the low point of aviation demand for domestic routes appeared in February, August and November, and the high point was in March, April, May and July. As the Civil Aviation Administration of China enforced strict control over the cases imported from overseas, the number of international and regional flights has always hit a trough, with small fluctuations throughout the year. Compared to 2019, the monthly number of international and regional flights has dropped by more than 90%. Only the number of flights in April and July increased slightly compared to 2020.

Compared to other airports in China, Shanghai Pudong International Airport is more dependent on non-aviation revenue such as international routes and duty-free business rentals in terms of results. Therefore, the sharp drop in international passenger traffic has a greater impact on the airport's results. According to the result forecast released on 24 January 2022, the Company predicted losses in 2021 could reach RMB1.64 billion to RMB1.78 billion. The corresponding loss from Q1 to Q4 was RMB436 million, RMB304 million, RMB510 million and RMB390-540 million. The annual tax-free revenue was expected to approach RMB500 million, a decrease of nearly 90% compared to nearly RMB5 billion in 2019. 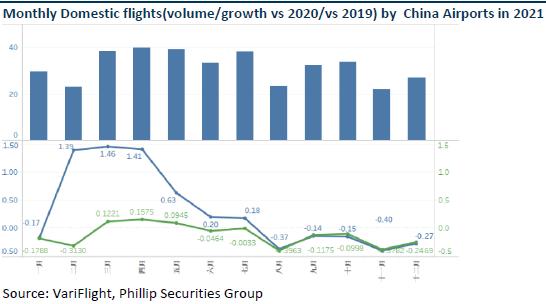 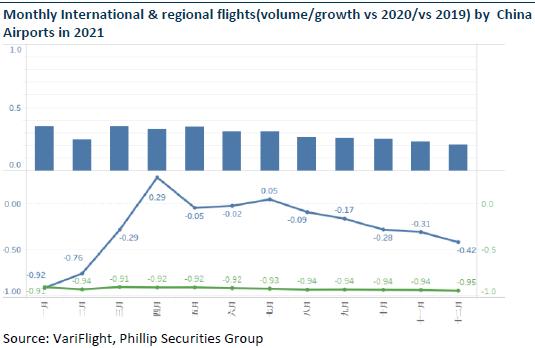 According to SIA's announcement, there were 29,735 aircraft movements in January, up 13.99% yoy; the passenger throughput was 2,118.3 thousand, up 14.47% yoy; the cargo and mail throughput was 318.7 thousand tons, down 10.43% yoy.Recently, the government announced the 14th Five-Year Plan for the civil aviation industry, in which 2021~2022 is defined as the recovery period and accumulation period of China's civil aviation industry, while 2023~2025 is the growth period and acceleration period. The focus will be on expanding the domestic market and restoring the international market, and vigorously developing the cargo market. We expect 2022 to become an inflection point in the results of airport companies, and 2023 will start a rebound in results.

We think that Hongqiao Airport, which mainly engages in domestic routes, has quick business recovery. In the long run, it has good development prospects and strong profitability. The injection into the listed company will realise the re-integration and optimization of route resources. Affected by the pandemic, Pudong Airport, which mainly focuses on international routes, has high operating costs. In order to utilize resources more rationally and efficiently, Shanghai Airport has tried to divert a large number of idle international time resources to the domestic market, so that the passenger flow of Pudong Airport will recover faster. In addition, the reorganisation will also incorporate the logistics and cargo business, which will help improve the air cargo hub network, expand multimodal transportation, and optimize the cargo layout of Hongqiao Airport and Pudong Airport.

We think that with the progress of vaccines, although there will still be challenges and setbacks, the dawn of the road to recovery has been clear, the airport encumbered by the pandemic has passed the darkest period, and the future performance of the Company is more inclined to grow than decline. In addition, as the injection of additional assets has not yet been completed, the relevant impact will not be considered for the time being. We revised the EBITDA predicted value of SIA in 2021/2022/2023, and revised the target price to RMB 62.3 (formerly RMB 56.3), and the &#34Accumulate" rating is given. (Closing price as at 1 March) 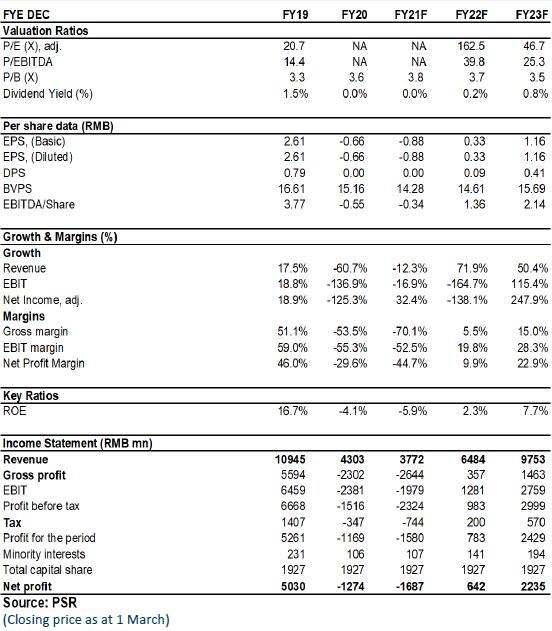