Under the impact of the COVID-19 epidemic, Shanghai International Airport (SIA) recorded revenue of RMB2.47 billion in 2020H1, down by 54.7% yoy; The net loss attributable to listed shareholders was RMB386 million, which was the Company's first loss in past 26 years since listed. The basic loss per share was RMB0.2, and the profit in the same period last year was RMB2.7 billion; The net profit in Q1 was RMB81 million with an increase of 94% yoy, and that in Q2 was -RMB466 million with a decrease of 136% yoy.

Both aeronautical and non-aeronautical revenue has dropped sharply, same with the investment gains

In H1, the passenger throughput dropped by approximately 68% yoy, the cargo and mail throughput remained flat yoy, and the aircraft movements dropped by 46% yoy, SIA has the highest proportion of international passengers (43%), thus it has been suppressed by the spread of overseas epidemic more severely, and its international traffic in Q2 was close to zero (-99%yoy). Dragged by this, in H1 of 2020, the service fee revenue of passenger as well as cargo and mail decreased by 70% yoy, and aircraft service fee revenue decreased by 43% yoy. Finally, the Company's aeronautical revenue dropped by 58.5% yoy to RMB840 million.

In terms of non-aeronautical business, due to a significant decrease in tax-free sales in H1, the Company adopted conservative accounting standards for single-month rental revenue, resulting in a decline in non-aeronautical revenue, which was RMB1.63 billion, down by 52.5% yoy.

Due to the decrease in the number of passengers, the business volume of the major shareholding companies simultaneously fell into a downturn, thus the profits they contributed were also affected. The investment gains dropped by 66% yoy to 186 million.

Since Pudong Satellite Hall was put into use in September last year, the costs of depreciation and amortization as well as operation and maintenance in 2020H1 have increased significantly yoy. As a result, the total costs increased by 33.3% yoy to RMB3.172 billion, of which the D&A reached RMB636 million, up by 83% yoy. We expect the drag caused by the D&A to weaken in Q4. The apparent decline in revenue and the rigidness of cost expenditures caused the operating cash flow to decrease in H1, from the net inflow of RMB2.2 billion in the same period of last year to the net outflow of RMB640 million.

Taking into account the short-term outbreak affecting the Company's aviation and non-aviation business, as well as cost pressure, we have revised the EBITDA per share forecast in 2020/2021/2022. The target price is revised to RMB 81, with the estimation of a 77/27/17.6x multiple respectively, and the &#34Accumulate" rating is maintained. (Closing price as at 9 October) 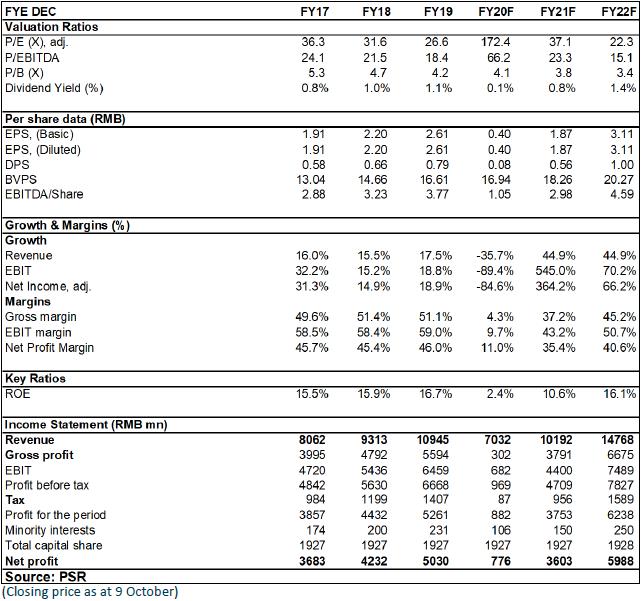