Tianneng Power's 2019 revenue and net profit increased by 17% and 42%, respectively, but the gross profit margin declined slightly. We believe that the current market is too pessimistic about the company, as current valuation near a decade low, which does not reflect the company's leading position in domestic lead-acid battery market and expectation of stable growth. For valuation we cut our target price to HK$8.51 to reflect the possible challenge of the Company, maintain a Buy rating.

Better-Than-Expected Results in 2019 with 40% More Earnings

Tianneng Power recorded a sales revenue of RMB40,614 million, a yoy increase of 16.9%; the profit attributable to shareholders stood at RMB1.682 billion, a -yoy increase of 41.5%. Basic earnings per share were RMB1.49. The proposed final dividend was HKD0.39 per share. The dividend payout ratio reached 23%. Results were better than expected, but the dividend payout ratio was slightly lower than last year.

The gross profit was RMB4,688 million with a gross margin of 11.54% during the period. There was an increase of 16% and a fall of 0.3 ppts yoy, respectively. Due to the new trading business, the overall gross margin was lower than in 2018. Excluding the trading business, the gross margin in the manufacturing industry increased by 2.7 ppts to 15.39%, reflecting an optimized sales structure and a decrease in the price of raw material lead.

The Company's expenses were properly controlled. The period cost rate (sales + administration + R&D) dropped by 1 ppts to 6.66. This was mainly because the expenses for sales and R&D only increased by 0.8% and 3.5% yoy, respectively.By optimizing the debt structure, at the end of the period, the asset-liability ratio reduced by 6.1 ppts and the ROE rose by 0.8 ppts to 23.7%.

In 2019, the Company's market share in the domestic lead-acid battery of light electric vehicle has exceeded 44%, more than 3 ppts higher than in 2018. In H1, due to some changes in the industry policies, customers` wait-and-see attitude led to a drop in the demand for the lead-acid battery. With further integration in the industry, the demand recovered in H2, resulting in a better sales situation than in H1. Battery sales revenue increased by about 25% hoh and the net profit doubled to RMB1.14 billion hoh. The full-year profit contribution was RMB1.71 billion.

In the business of lithium battery and renewable lead, the revenue of lithium battery increased by 13.5% to RMB630 million but renewable lead down by 54% to RMB940 million yoy. The decline in the recycled lead business was mainly due to the fact that some products were converted to internal sales after the technology was upgraded, and the profit contributed by the division still maintained rapid growth.

The Company's trading business recorded a turnover of more than RMB10 billion. The earning improved in H2, turning losses into profits. However, its profitability was not powerful, with the recorded full-year net profit of RMB16.34 million.

With the increasing requirements of environmental protection in domestic, the concentration of the lead-acid battery industry will continue to improve. As the leading enterprise, Tianneng Power's &#34cash cow" — lead-acid battery business will remain stable. The Company plans to spin off the subsidiaries and list on the Sci-Tech innovation board in Shanghai. It is going to raise RMB3.6 billion, mainly for the upgrading and transformation of the existing lead-acid batteries (RMB840 million), also for some project construction such as high-energy lithium batteries (RMB850 million) and high-capacity start-stop batteries (RMB430 million), as well as the supplement of fluid capital (RMB1 billion). The Company is expected to complete the spin-off and listing early next year. 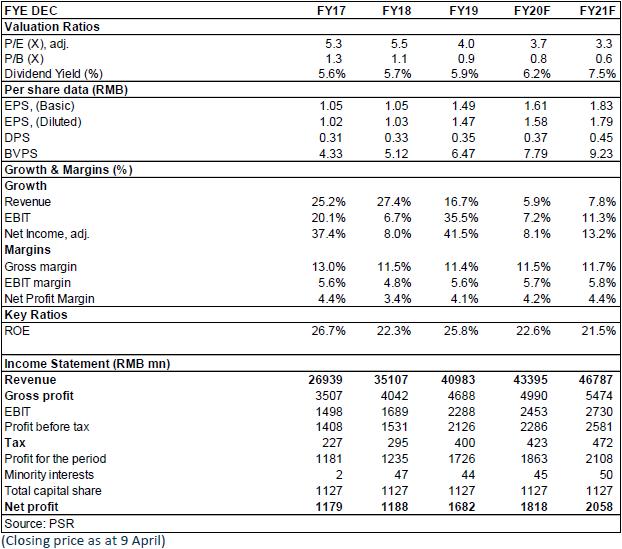