The articles are produced in Chinese only.

As of the first quarter of 2019, duty-free stores in Pudong T2 Terminal started to adopt the new royalty rate of 42.5%, increasing sharply by 17.5ppts from that of 25% of 2018. In the first quarter, this section contributed RMB1.01 billion to the revenue, equivalent to a turnover of RMB2.38 billion, which was estimated to drive an overall tax-free sales growth of 33% yoy approx. We believe that the improved deduction rate and substantial sales growth have boosted the profitability of the non-aeronautical business of SIA and were the main driving force for its strong performance in the first quarter. The Company's overall gross margin reached 55.24% in the first quarter, increasing by 4.5ppts from that of 50.7% a year earlier.

In Q1, the Company's expense ratio dropped significantly, with the sum of sales, administration and financial expenses totaling RMB11.62 million, decreasing by 53% from that of RMB24.77 million a year earlier. Cause for such drop mainly lies in the decrease of current operating costs of one subsidiary, the expiration of the depreciation period of fixed assets, and one-time expenses in the same period of the last year. In addition, due to the change of accounting method, the investment gains increased by 39% or RMB85 million yoy.

Satellite Terminal S1 and S2, the Phase III Expansion Project of Pudong Airport, is expected to put into service in September, 2019, which will increase a duty-free area of 9,062m2, and T1 and T2 Terminal will offer a new duty-free area of 1,000m2, which is expected to enhance the shopping experience of passengers while expanding the area of its duty-free business, so as to fully release the premium valuation of the Company as a leading hub airport.

Considering the Company riding on the new round of stable growth period, we revise the Company's EBITDA per share in 2019/2020 E EBITDA per share. The target price is increased to RMB 74, with the estimation of a 19/18x multiple respectively, and the &#34Accumulate" rating is maintained. (Closing price as at 9 May 2019) 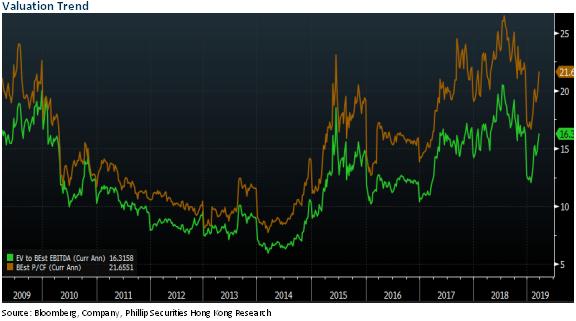 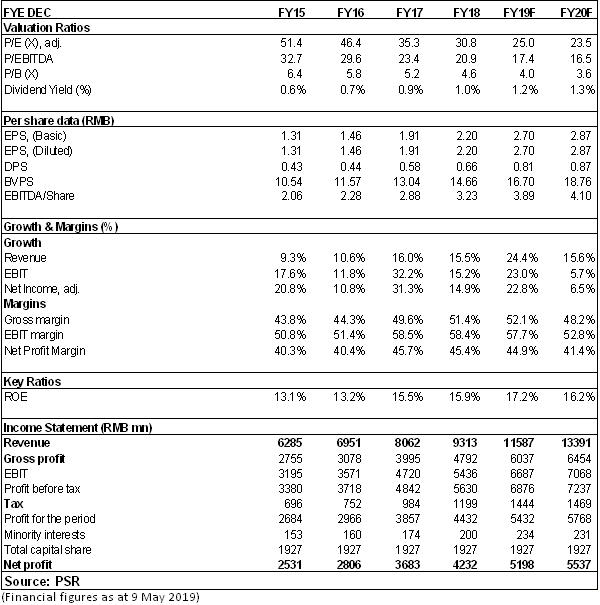