Kevin Chiu received Bachelor`s Degree from University of Bristol and obtained Master`s Degree with distinction in Accounting and Finance from Warwick Business School. Kevin once worked as an analyst in the Equity Capital Market department of China Securities International, and he is familiar with the operation of Hong Kong`s capital market. Kevin is currently a licensed research analyst at Phillip Securities and covers TMT / Education sectors.

The movie box office for 2020 was RMB 20.3 billion, which is in line with our previous expectation

Affected by the epidemic, all of the cinemas in China was temporarily suspended from January 24, 2020 to July 19, 2020, and only started gradually reopened on the 20th of July. According to the data from Maoyan Professional Edition, the total movie box office of China in 2020 was RMB 20.3 billion, down 68% yoy, which is in line with our previous expectations.

The total movie box office during 2021 Chinese New Year was up by 32.47% yoy, reaching RMB 7.8 billion and hitting a record high. During the Chinese New Year holiday, the company has participated in 5 major films as either producer or distributor or both. These 5 films are Hi Mom (你好,李煥英), Detective ChinaTown 3 (唐人街探案3), A Writer's Odyssey (刺殺小說家), Boonie Bears: The Wild Life (熊出沒·狂野大陸) and The Yinyang Master (侍神令). As of 23rd February, the box office rankings of these 5 movies were 1st , 2nd , 4th , 7th and 11th respectively, with a total box office of RMB 9.93 billion. Hi Mom (你好,李煥英) directed by Jia Ling is one of the dark horses among all the high-quality movies during the Chinese New Year holiday. According to Maoyan Professional Edition, as of February 23, the total box office of Hi Mom (你好,李煥英) reached RMB 4.31billion, with a forecast box office is RMB 5.22 billion. Hi Mom (你好,李煥英) currently ranked fourth on the box office rankings of Chinese film history. Hi Mom (你好,李煥英) has a Maoyan rating of 9.5/10, and more than 88% of the audience have given a 5-star rating to the movie, both of which ranked 1st among all movies during the same period. As the lead publisher and one of the main producer of Hi Mom (你好,李煥英), the company is expected to receive a relative high box office share as revenue.

As of February 23, 2021, the total box office of Chinese films has reached RMB 14.4 billion, and the total box office has already reached 71% of that of 2020. It can be seen that even under the policy of restricting attendance in cinemas, the recovery of Chinese movie industry remains strong. We expect the total box office in 2021 to return to the level prior the pandemic. As the leading movie ticketing platform in China (According to the Maoyan Professional Edition, the movie tickets sold through Maoyan platform have accounted for about 60% of the total during the Chinese New Year holiday), the company's earnings in 2021 will be substantially restored.

1) Pandemic broke out again in China

4) The box office of company's productions is worse than expected 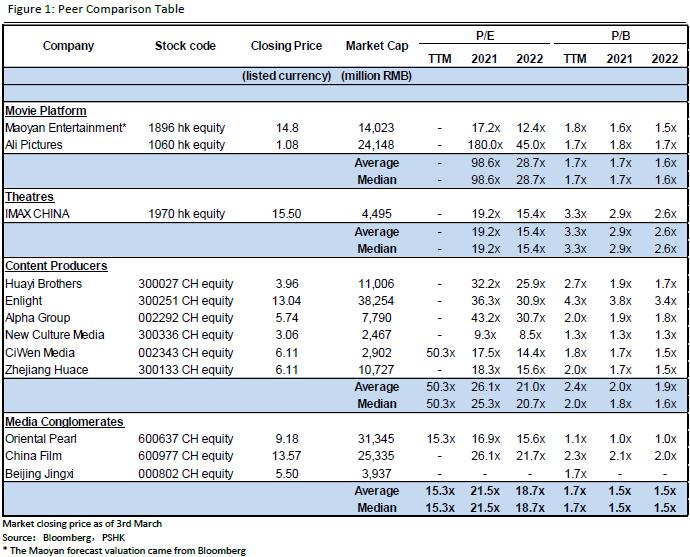